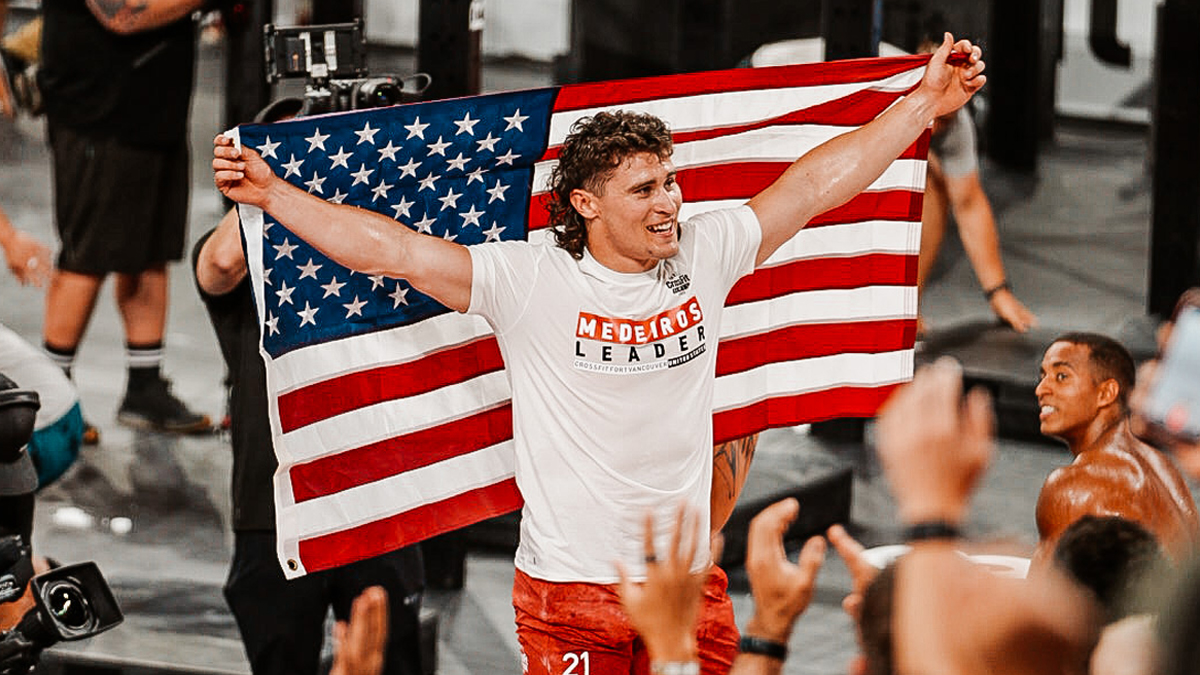 The final day of the 2022 CrossFit Games opened ominously after a stormy night. The North Park field was soggy as light rain continued and the possibility of storms loomed. But that wasn’t enough to stop the action, as it was time to crown the Fittest Man, Woman and Team on Earth.

The first event of the final day was a throwback to Adrian Bozman’s time at San Francisco CrossFit. It included sled pushes (with the sled full of kettlebells), legless rope climbs starting from a seated position and kettlebell clean and jerks. On the way down the field the athletes dropped off their kettlebells at 42-foot increments and on the way through the workout, reloaded them after sets of clean and jerks.

First to take the field, after a brief weather delay, were the men. All 30 remaining competitors took the field at once. It took about one minute to push the alpaca sled down the field and unload it. As they got into the clean and jerks, Ricky Garard and Justin Medeiros were neck and neck, but it was Roman Khrennikov who finished the initial set first. In the second set, Khrennikov held the lead with Garard on his tail as Medeiros fell back. Knrennikov started his final sled push first and took the event win in 6:23, his second in-person event win. In a late charge, Medeiros out-pushed Garard, with Jayson Hopper finishing between the two of them.

In the dog fight among the top three, Khrennikov gained ground and after the leaderboard was updated, Khrennikov was two points ahead of Garard, while Medeiros held a 23 point hold on first place..

On the women’s side, all 30 women faced off in a single heat. As it was with the men, the women traversed the field in about one minute, unloading their sleds. On the first set of clean and jerks, Laura Horvath got out to a quick lead and was the first back on the sled, with Karin Freyova and Dani Speegle just behind. Horvath extended her lead in the second set with the kettlebells. Gabi Migala got into the mix by the midway point as well. Horvath held on to grab her first event win in a dominating performance. It was the fifth event win of her Games career. Speegle finished in second (on the back of her first place finish last night), Karin Freyova ended in third.

In the podium race, Toomey finished just ahead of O’Brien gaining 3 more points, but Danielle Brandon finished well ahead of Emma Lawson who took 24th in the event and overtook the rookie in podium position at third place.

The men tackled the event, which had a tight time cap of four minutes and in the first heat Willy Georges set the time to beat at 1:29. In the second heat, Travis Mayer and Gui Malheiros got out to a lead making the turn at one minute. Malheiros got the heat win at 1:39, but Georges’s time held into the third heat. In the final head, Garard struggled on the yoke and Khrennikov and Medeiros were ahead, Medeiros and Khrennikov made the turn in a minute, but it was Medeiros who was able to go unbroken on the yoke to take second place behind Jeffrey Adler who crushed the event at 1:17, while Garard continued to struggle taking 13th place in the heat. Once the scores were tabulated, Medeiros finished third, Khrennikov sixth and Garard in 13th.

Medeiros held a 35 point lead heading into the final event over Khrennikov, with Garard 30 points behind him.

On the women’s side, Christine Kolenbrander took the first heat win and set the time to beat at 1:33. In heat two, Speegle and Migala got to the barbell first, but Barnhart took over the lead at the turn in :45 seconds. Migala and Barnhart made it to the final yoke carry and took the time to beat at 1:24, with Migala behind her at 1:27. The final heat took the floor and Toomey and Horvath took a huge lead as Danielle Brandon couldn’t finish the first yoke carry before they finished. Horvath took the event win at 1:13 with Toomey behind her at 1:16. As the clock ran out, Brandon stood looking at the bar and couldn’t finish her first deadlift.

As the crowd lost its collective minds, the scores were tabulated and Horvath took the event, Toomey in second, Wells in third, and Barnhart in fourth. Remarkably, Brandon finished in 25th, dropping to fourth place while Horvath jumped into third, with a 36-point lead. Toomey maintained the lead and O’Brien firmly held her second-place spot.

It was up to the men to begin the end of the 2022 Games, taking on Jackie Pro, a revamped version of the classic benchmark Jackie (similar to Elizabeth Elevated earlier in the week). The 1000m row required the athletes to finish under 3:15 for the men and 3:40 for the women. Then, 50 thrusters at 95 pounds for me and 65 for women (instead of the traditional 45 pound bar), ending with 30 bar muscle-ups (instead of chin-over-bar pull-ups).

The men took on this beefed-up benchmark first. In the first heat, the entire group finished the row under the time cap, but rest on the rower before advancing to the barbell. Tim Paulson got out to a slight lead on the thrusters, but Jay Crouch chased him down and was the first off the bar. On the muscle-ups though, Uldis Ulpenieks took the lead doing an unbroken set of 14. But it was Guillaume Briant who set the time to beat at 8:52. In the second heat, Lazar Djukic was first off the row with Cole Sager and Travis Mayer. Through the thrusters, it was Sager in the lead and first to the bar muscle-ups. Djukic and Sager battled it out on the rig, with Djukic taking it at 7:59. Sager followed quickly at 8:10.

In the final heat of the final event, the three men at the top of the leaderboard were set to battle it out one more time. It was Knrennikov, Kwant, Garard and Medeiros first off the row. Vellner got out front on the thrusters, but it was a big lead pack. Medeiros and Khrennikov, with Hopper got to the rig at the same time. Khrennikov got out to a lead over Medeiros, but the reigning champ had a decent cushion.

At the end of the event, Medeiros kept it close enough, despite Khrennikov’s charge, to take the overall win. Khrennikov took the heat win at 8:09. Djukic took the event win at 7:59.

The final men’s podium will be Medeiros in first place for the second year in a row, Khrennikov in second 27 points behind, and Ricky Garard in third, 89 points behind Khrennikov.

The women were the last to take the floor on the individual side. In the first heat, two women, Thuri Helgadottir and Rebecca Fuselier failed to make it past the row, but Freyova and Kolenbander, Prevost and Powers hit the rig at the same time. But it was Freyova who took the heat win at 9:31. In heat two, Ellie Turner, Haley Adams and Lucy Campbell battled it out through the thrusters. The three women took to the muscle-ups at the same time. Campbell took the lead on the bar muscle-ups with Adams just behind her. Campbell took the new top time at 8:29 with Adams behind her at 8:56.

In the final heat, Horvath was off the row first and didn’t rest at all. She walked straight to the barbell and started repping out thrusters. Mal O’Brien was just behind her, followed by Kara Saunders. Midway through the thrusters, Toomey made a move, heading toward the top of the heat. Once they made it to the bar muscle-ups, Kara Saunders took the lead over Horvath and took the heat win in 8:35. But all eyes were on Tia-Clair Toomey as she finished the final event of her individual career and Sean Woodland announced that she was retiring after this year.

After making history as a six-time Games winner, during her post-event interview though, Toomey declined to say whether she would retire. When Niki Brazier asked if this was it, Toomey said “that’s the big question, isn’t it?”