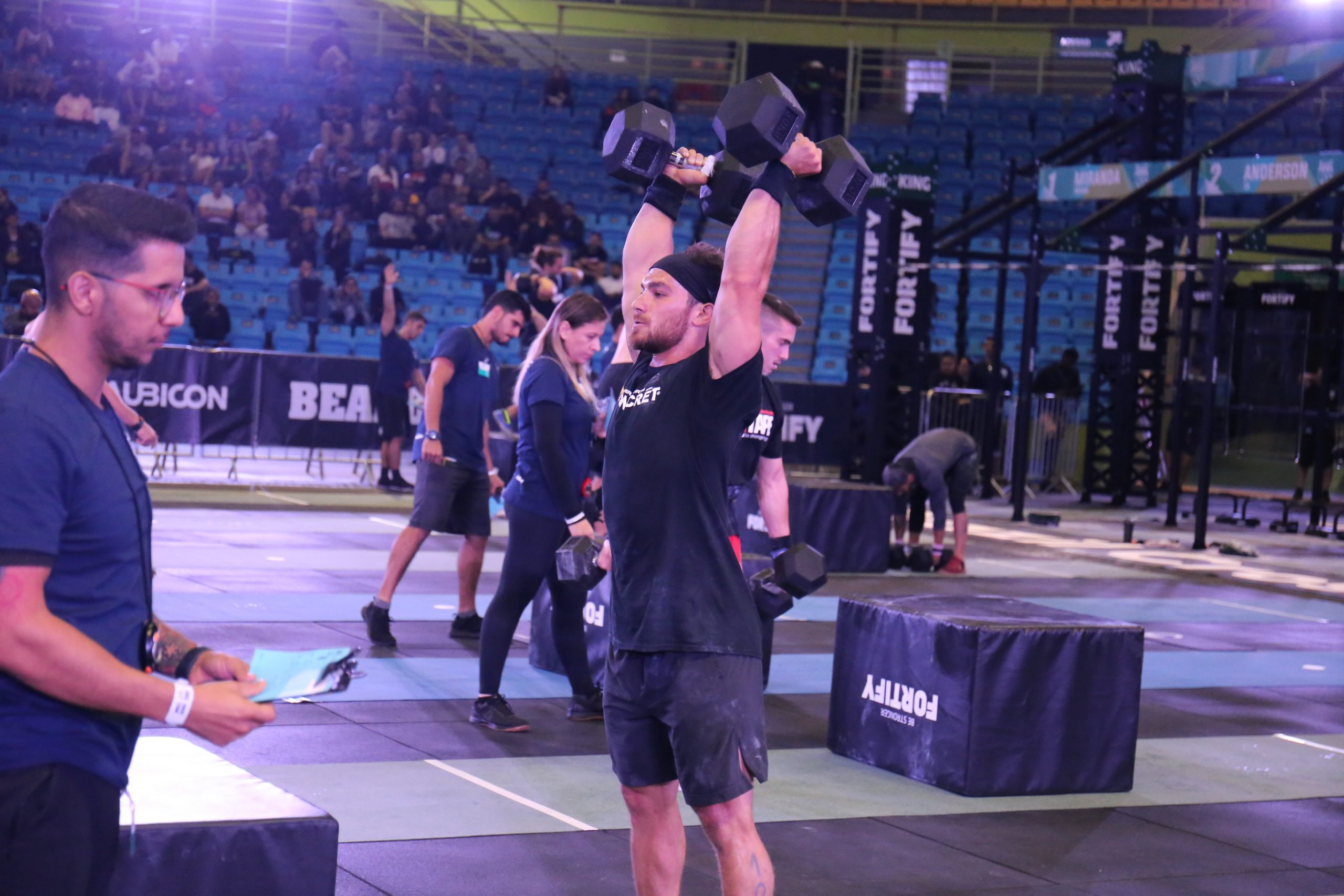 Day 1 of competition has wrapped at the Brazil CrossFit Championship, and the individuals were tasked with two vastly different tests. Event 1 titled “Row/Swim,” not only required the athletes to swim, but inclusion of rowing sets in between forced them to do so fatigued and out of breath.

Once things moved inside the Ibirapuera Gymnasium the aptly titled “March of Pain,” gave athletes to distinct sections of work to try and unpack. The first, an upper body focused, gymnastics heavy buy in of parallette handstand push-ups and chest-to-bar pull-ups in one big chunk, before tackling the second portion – a five round couplet of double dumbbell clean and jerks, and dumbbell box step overs.

The combination brought some familiar names to the forefront, but also set the stage for some surprise performances in each division.

Three names: Cecilia Ramirez Villamil, Paige Semenza and Jessica Schwartz. None of these ladies has an invite to the CrossFit Games.

Cecilia Ramirez Villamil came into the day with zero fanfare and left with the overall lead after two events. A third place in the swim, and an impressive event win to close the day will have many people scratching their heads when they see Villamil – who finished 945th worldwide in the Open and 18th in Mexico – ahead of experienced athletes like Mekenzie Riley, Carolyne Prevost, and Paige Semenza in second, third, fourth.

Semenza is the next athlete in line behind Villamil who doesn’t have her spot to the Games, and she closely trailed closely by Jessica Schwartz – another dark horse athlete who had a fantastic day one and is just 4 points behind in fifth. They’re the ones to watch for the eventual invite to the Games.

Jessica Schwartz during her final set of clean and jerks on Event 2.

With three stout events on tap for day 2 it plays into an athlete like Semenza’s hand who has seen high volume programming like this at the Games, but if Villamil and Schwartz are still in the conversation after the bar muscle-ups and heavy snatches of event 5, then they’re a serious threat to pull off an upset come Sunday.

Saxon Panchik completing his set of 50 chest-to-bar pull-ups during Event 2.

Three current or former Games athletes sit at the top of the leaderboard, but only one has his ticket to the Games. Will Moorad in third place is competing at his third sanctioned event in a months time, and hasn’t earned his place to Madison despite podiums at the Mid-Atlantic CrossFit Challenge, and the Reykjavik CrossFit Championship.

Thankfully for Moorad overall leader Sean Sweeney already has his spot booked. Moorad has as a fight on his hands though in the form of twin brothers Saxon and Spencer Panchik. Saxon is eight points ahead and currently in the invite spot, and then there’s Spencer 14 points back of Moorad. Mix in former teenage champion Angelo Dicicco, who basically came out of retirement to compete in this event and sits in 5th place – 38 points behind Saxon after day 1 – and it should be a good battle between Moorad, and a trio of young, talented athletes surrounding him.

Pay attention to event 4: The big turning point for all three could be Event 4 “Strongman’s Wind.” The addition of the weight vest for the entirety of the workout which includes the 80 total calories on the bike and 160 double-unders is a bit of a mystery in terms of who it really benefits because the weight vest is sparsely used in conjunction with machine implements and odd objects.

It could come down to who of the three is willing to roll the dice and push the pace early in the workout. Moorad, both Panchik’s, and Dicicco are all capable of finishing under the aggressive timecap of Event 5 to close the day, so it will be worth watching who is willing to gamble and potentially build some momentum before that.