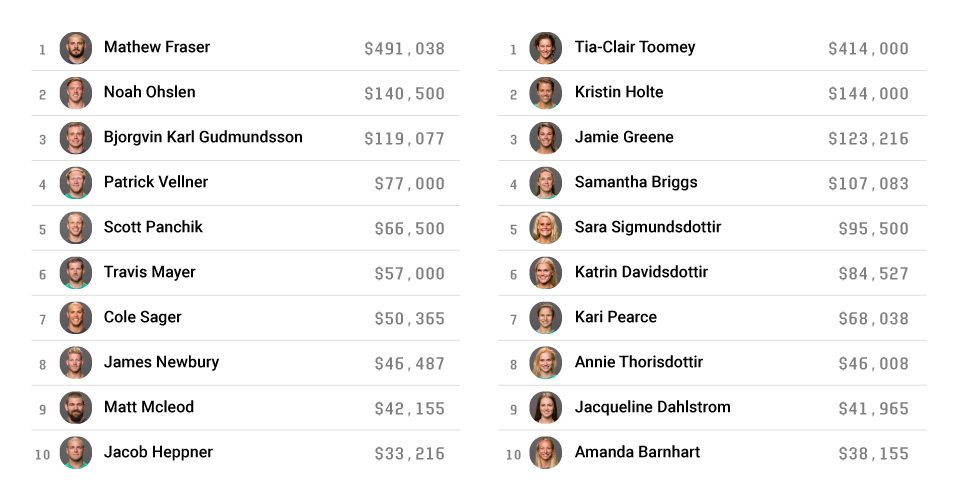 The massive overhaul of the 2019 CrossFit Games season brought significantly more competition opportunities, and with it came the chance to make some extra cash in the process. Between the Open, Sanctionals, and the Games, there was more money up for grabs than ever before, and we’ve got updated payouts* and analysis for the top athletes in 2019.

It pays to be a winner: For the fourth year in a row Mat Fraser is the top earner on the men’s side and the difference between him and the rest of the field is staggering. Fraser’s 2019 total is more than the next five athletes combined despite only participating in four events across the entire year. In the top 10, only Jacob Heppner participated in fewer events.

Making history: It was a banner year for Tia-Clair Toomey and her prize money reflected it. Wins at Wodapalooza and the Rogue Invitational, and a career-best finish in the Open set the table for Toomey to become the first-ever three-time CrossFit Games champion on the women’s side, winning by a record 195 point margin.

The Sanctionals provided significant earning potential for a variety of athletes, but the performance at the Games was still the most lucrative. The top three earners on both lists directly reflected the podium at the Games, with Noah Ohlsen, Kristin Holte, and Jamie Greene all making the podium for the first time and finishing in the top three as well.

The top 10 men and women combined took home a shade under 2.3 million dollars in 2019, and there are 13 additional events slated for this season. Strategy will dictate how that will be reflected in the top 10 earners for next year, but in the very least there’s more money on the table for athletes than ever before.