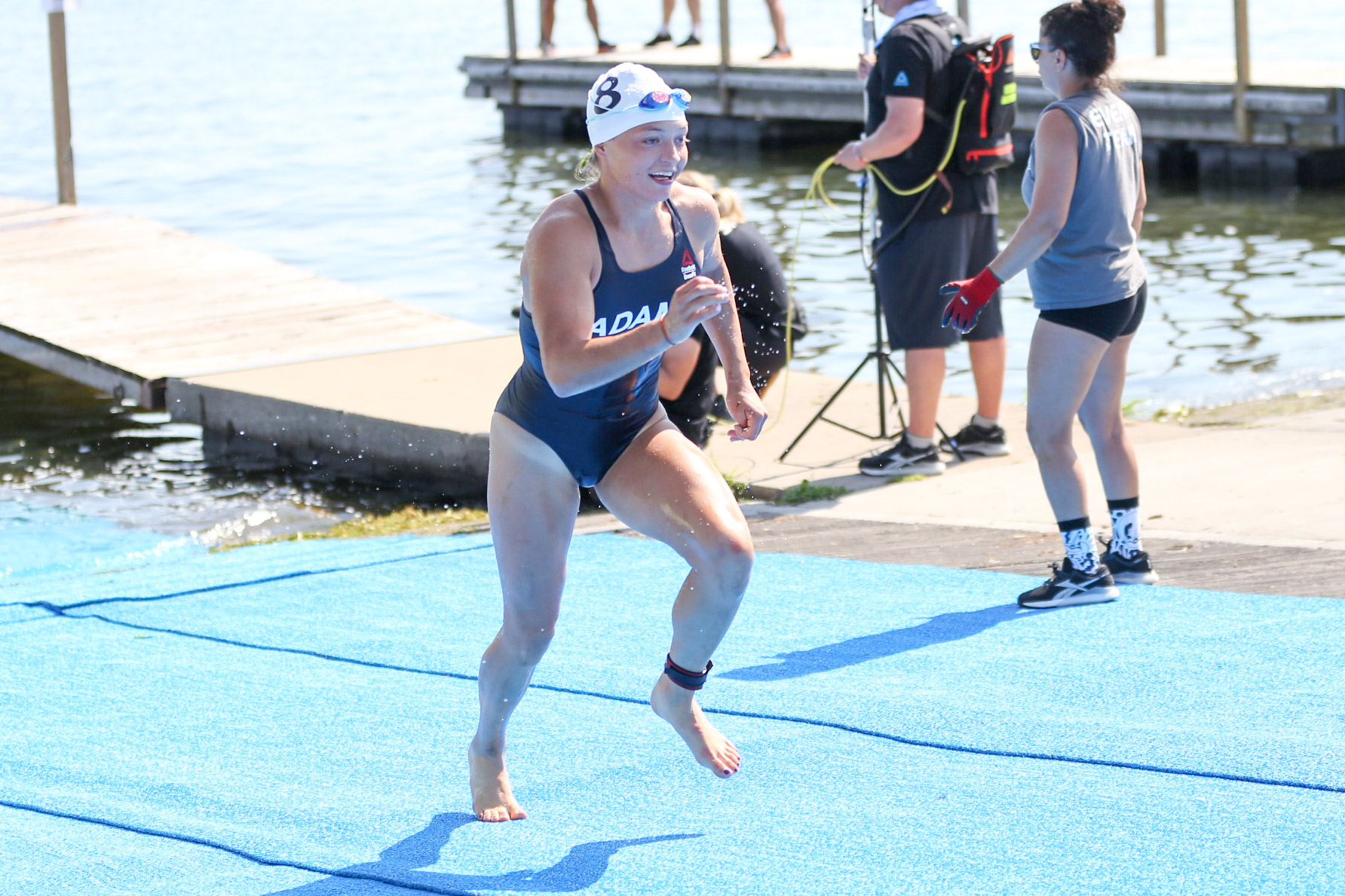 We looked at how the men and women stack up against each other when it comes to “Odd Object” workouts at the Games on Wednesday. Today we analyze workouts that test aerobic capacity: monostructural workouts (i.e. swimming, a sprint, or biking) or workouts that include cardiovascular endurance mixed with other movements (i.e. Murph or last year’s “First Cut” workout at the Games). We will use historical data in those defined workouts going back to the 2016 Games to analyze what awaits the five men and women in the live stage of the Games at the Ranch in Aromas, CA on Oct. 19-25

The big picture: Since 2016 the Games has averaged five aerobic capacity workouts during the week of testing to find the “Fittest.” Expect Dave Castro to utilize every acre of the Ranch to test the ten athletes in the finals this year.

Aerobic capacity workouts: Since the 2016 Games, there have been 22 workouts that test aerobic capacity. Last year many dubbed the Games, “the Cardio Games” due to the many aerobic workouts but in actuality it was about par for the course over the last four years. What might have been the reason for that was that four of the first six workouts featured some form of test of cardiovascular endurance (five if you count the short row and handstand walks of “Second Cut” but we are counting it more as a gymnastics/skills test).

The details: Here are the average finishes in the aerobic capacity workouts.

What we learn: It’s no secret on the men’s side that Fraser is at another level when it comes to workouts that include running, which used to be considered a weakness for him. Then the sprint event at the 2016 Games happened and Fraser tracked down Ben Smith during the final stretch for the heat win, with Sean Woodland famously saying “What can’t this guy do!” during the broadcast. In true Fraser fashion, he developed a weakness into a strength and showcased it at the 2016 Games and he has maintained that, proving it again this year in his first place finish in “Nasty Nancy” in the online stage of the Games less than a month ago. Fraser has had top-three finishes in varying types of aerobic capacity workouts — swimming, biking, running and rowing. Examples of this are the “Ranch Trail Run” in 2016 in which he won, finishing second in “Murph” that same year and in 2017 when he placed second in the Cyclocross.

Ohlsen has been inconsistent in these types of events. His strengths lie in swimming workouts and tests that include sprinting. In 2017 and 2019 Ohlsen finished ahead of Fraser in the “Madison Triplet” and the “Swim Paddle.” However the longer running workouts like the “Ranch Trail Run” in 2016 and the “Ruck” from last year, he placed 32nd and 24th respectively.

Kwant has traditionally struggled in aerobic capacity workouts, with nine of his 17 finishes in the bottom half of the field. However during the online stage of this year’s Games he recorded his best finish in these workouts with a third place in the 1,000 meter row and followed that with an eighth place finish in “Nasty Nancy”.

Adler and Medeiros are unknowns due to the lack of historical data. Adler’s placings have been all over the place. He finished fifth in “First Cut,” but then placed 21st in the “Ruck” and 39th in the “Sprint Couplet” at last year’s Games. He appears to have learned from his struggles and has been training in these events. At the Mayhem Classic he placed fifth in the 1,000 meter portion and ninth overall in the “Ruck” event.

For Medeiros, the 21-year old Games rookie, the sample size is even smaller. He placed 15th in the 1K row but then was impressive in “Nasty Nancy” finishing just behind Fraser. With his performance in that event and in “Galen” at the Filthy 150 Sanctional in November, he appears to be a sprint to mid-distance athlete. That workout in Dublin, Ireland in which we placed second, featured three 400-meter runs with four rounds of unbroken rope climbs. However he placed 16th in the longer distance “Trek Run” which included a 4K bike and 1K run.

On the women’s side it again looks to be a two-woman race in aerobic workouts between Toomey and Davidsdottir. Toomey is unmatched in any event that includes water, she is undefeated with four event wins. Davidsdottir meanwhile has an average placing of 11.5 in those same events. So how is it that Davidsdottir is just above one place behind Toomey in terms of average placing in these events? The answer is the more grueling the workout is and the more implements involved plays right into the Sled Dog’s wheelhouse. Whether it’s “Murph” (second place in 2016), the “Madison Triplet” (first in 2017) or this year’s first place in “Nasty Nancy”, if it’s a workout that most people will hate, she thrives in.

For Pearce she has just six finishes in the top-ten in the 22 aerobic capacity events. Eight of her finishes have been 20th place or worse. However in 2016, she won “Murph” and followed that up with a second place in the “Climbing Snail”, helping her to her fifth place finish at the Games that year.

Wells has ten finishes in the bottom 20 in 21 events. A standout sprinter in high school, she has thrived in short to mid-distance workouts. In those types of workouts her average placing is 8.2 but would be better if not for stepping out of bounds in last year’s “Sprint” event placing her 20th in an event she was considered one of the favorites.

That leads us to Adams, who could see herself on the podium at 19-years old. If this year’s Games do indeed have four to six workouts that test aerobic capacity, the Chris Hinshaw disciple could, dare I say, push Toomey in her bid to become the four-time “Fittest Woman on Earth.” Since making her debut as an individual athlete last year, Adams average placing is 8.8 over seven aerobic capacity events. That average is better than Davidsdottir, Pearce and Wells during that same span. Toomey’s average finish is 4.1 during that same time, which is nearly two places better than her four-year average. Adams has finished no worse than sixth in six of the seven events, which is the same as Toomey.

Here is their head-to-head event comparison since the 2019 Games:

These numbers do not include Adams dominance in similar workouts in the teen division at the Games. Dating back to the 2016 Games when she finished second in the 14-15 year old girls division, Adams has won six of the eight aerobic capacity events. Her time of 32:38.43 as a 16-year old in the “Run-Swim-Run” event in 2017 would have placed her 17th in the women’s division ahead of Wells and Pearce and just three spots behind Davidsdottir.

The bottom line: For the men it looks like Fraser could continue to dominate these types of events once again. The possible exceptions could be in the water which we predict there is going to be some type of pool workout. In that case look for Ohlsen to be the favorite but Fraser will not be too far behind. In shorter to mid-distance workouts look for Medeiros to once again push Fraser. Adler and Kwant have obviously made great strides in these types of events over the last year after their disappointment at the 2019 Games. However we don’t believe there is anyone more well-rounded in these events like Fraser. The historical data and his performances both past and present support this unequivocally.

It might not be so easy for Toomey. Despite her numbers trending up in these events, she has company, most notably Davidsdottir and Adams. If she finishes an event behind one of these athletes it’s not a big deal, however if she falls behind both of them which is very possible, then she has work to do. Adams is the one to note because she is perhaps more well-rounded than Davidsdottir in these events due to her running and swimming abilities. What will cause Adams some issue is if there is a heavy barbell or object grouped with any of these aerobic capacity events. Pearce and Wells could pull off wins if workout falls in their wheelhouse.