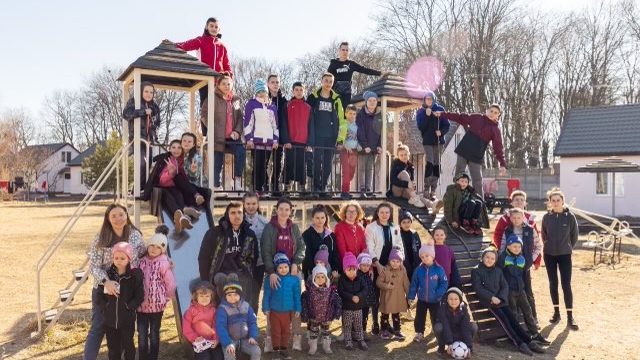 Like most coaches with a roster of CrossFit Games athletes to their name, Brute Strength Coach Nick Fowler spent March preparing his athletes for Quarterfinals, the only difference is Fowler did so from Ukraine.

On top of being a full-time coach, Fowler is also involved with August Mission, a non-profit that is 100 percent funded by private donations, dedicated to help recover, resettle and assist refugees.

Remind me: Fowler, the director of Strength and Conditioning at Brute Strength has a long coaching resume. He’s currently coaching CrossFit elites Spencer Panchik, Roman Khrennikov and Anthony Davis, and has also coached various other Games athletes in the past, including Kara Saunders, Brent Fikowski and now retired Jacob Heppner.

But Fowler’s biggest claim to fame might just be that he coached the 2017 Affiliate Cup Champions—Wasatch CrossFit—the only team that has ever been able to beat Rich Froning’s CrossFit Mayhem Freedom since Froning switched from individual to team competition in 2015.

So what led Fowler to drop everything and head to a war zone to help refugees? We caught up with him to find out.

What inspired you to get involved with August Mission, and be the first crew from that organization to head to Ukraine?

Fowler: I think the easiest way to say it is it’s a higher sense of purpose other than myself or my day-to-day living here. Some of the refugees in Ukraine, they’re walking hundreds of miles, for some of them with their entire lives on their back. The unknown that they face is unfathomable for most of us.

What was the purpose of your trip to Ukraine?

Essentially, my goal, my objective, was to find out where we could help, where we could do the most good. You know, we’re a small organization, and there are a lot of bigger organizations there, doing a lot of good. But our organization being small, we can manage risk a lot better, so my goal was to go out there and identify who are the people in the most need, and what does that look like long-term. Our goal is to be there for years, not just months.

Ultimately, my job was to put together a plan, so the teams coming that followed me could hit the ground running with a solid plan.

What did your daily activities involve?

We woke up early, first thing, and set the day’s agenda. Then my job specifically, was to kind of follow the breadcrumbs. There were a lot of meetings and coordinating with organizations and government and trying to understand where everybody is and what people are doing so we don’t duplicate efforts.

Some days we met with the local government, both within Poland and Ukraine to help identify the needs of the population. For instance, we sat down with the governor of Lviv and we were able to have conversations around, ‘Hey, what do you need? What does the region need? What does your city need?’ And we did that in a lot of different areas.

What were you able to accomplish while you were there?

We identified the region of Ternopil (in western Ukraine, east of Lviv) that basically has a bunch of shelters with refugees. There are no large organizations in Ternopil really focusing on the refugee population and the needs there.

We were able to personally meet some of the volunteers and coordinators of some shelters in Ternopil, so, for instance, at the tail end of my trip, we were able to buy a couple washing machines and get them into the shelter, which is something a lot of people don’t think about, but they need an ability to wash their clothes. So just simple day-to-day things like that make a huge impact.

(We also worked with) the regional director of health, and we were able to talk to him and bring in $60,000 in medical equipment and medication.

What is August Mission doing in Ukraine now?

It’s two-fold. Our objectives are to get needed supplies, humanitarian aid, into the region to the people who need it. And also, on every rotation that we put out there, we have a couple doctors rotating in. This is going to be our second rotation with doctors, and our third one is going out on the 12th (of April). We have also been able to purchase three vehicles, two vans and a truck (to transport goods and doctors).

Our partners on the ground over there have a big logistical network, so, for instance, we have 22 metric tons of supplies that in the next three to four days we’re going to be able to move across the border into Ukraine.

Being in the safer part of the country in Lviv, were businesses open? What was the vibe like?

Yeah, it really felt odd. At times, it felt like being on a European vacation. It was good food, great people. I had some of the best pizza there. Some really good coffee. Lviv was a really nice city.

Friends asked me, ‘Weren’t you worried?’ or “Did you feel like your life was in danger?’ and I don’t think that was the case at all. But I will tell you that my biggest concern when I was in Lviv was the amount of people. That city has close to a million extra displaced people in that city. So if anything were to happen…just any kind of situation that would create any panic, you wouldn’t be able to get out of that city very easily at all. So for me it’s the human factor, it’s the masses panicking, and that’s the biggest danger of Lviv.

What was the experience like for you emotionally and what was it like to come home to the United States?

What sums up my experience there was kind of that heartbreaking, heartwarming experience. It’s pretty incredible to see the community together, and I’m talking about the international community…and even within Ukraine. Everyone is united in helping. And so I think after a couple years of the world being pretty divided, it’s nice to see.

But there is a lot of tragedy. We’re working with one shelter that houses 48 orphans at the moment and 128 families, and those orphans, their future is unknown. The war is definitely creating a lot of tragedy.

Coming home, I think it has made me appreciate my family even more…Seeing orphans and just kids that resemble my daughter, or are the age of my daughters, and just seeing the experience that they’re going through, so overall there’s a real sense of gratitude for what I have.

How can the average person help Ukraine?

I think, what I have seen stateside, are a lot of people wanting to help. There are a lot of food drives and I see neighborhoods putting U-hauls of supplies together and things like that, in the US and around the world. And that’s great. People want to do something, so they’re organizing food drives, they’re organizing drop-off points, but it presents another problem. It presents the problem of, Ok, well, you have a truck full of supplies and you need to get it into Ukraine, but then you’re dealing with taxes, you’re dealing with customs, you’re dealing with shipping costs.

So honestly, the best thing people can do is donate directly to an organization they trust, where they know where their money is going. Because that stuff can be purchased within the EU and is much less expensive, and it can get there a lot quicker.