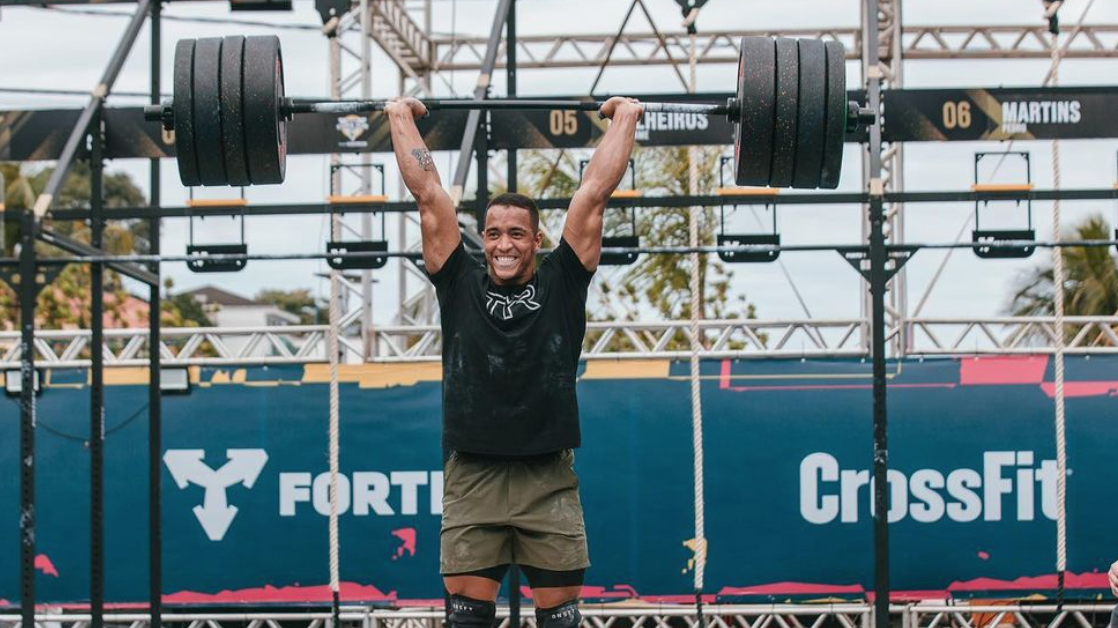 It might have been “Moving Day” on the second day of competition at the CrossFit Copa Sur Semifinal but the only thing Brazilian superstar Guilherme Malheiros was moving was heavy weight. The 22-year old NOBULL CrossFit Games podium contender made history in the packed Shopping Vitória Mall outdoor stadium, breaking the “Barbell Complex” record with a lift of 356lbs (162kg) setting off a celebration throughout the stands on Saturday.

It’s no surprise that Malheiros set the record, he’s been considered the favorite to set it since the workout was announced. From hinting at what he’s capable of doing in Instagram posts, cycling 315lbs like it was a paper weight, and engaging with Anthony Davis on social media after the American set the record last Friday at Granite Games with a lift of 355lbs. Malheiros hinted that he would attempt to break Davis’ record.

It was the manner in which he did it. He started off his first attempt at 335lbs, effortlessly squat cleaning the first three reps before going straight into his two front squats. There was no pause from when he stood up the last front squat as he stepped right into a quick split jerk while the capacity crowd cheered for approval.

For his second attempt, Malheiros elected to skip his turn to rest up for his third and final attempt.

When the judge flipped his declared weight cards for his final attempt, the crowd once again cheered as 162kg was displayed. Just like his first attempt he cycled the cleans and front squats with little issue. He then stood with the weight on his shoulders, took a breath and he then appeared to attempt the jerk, but the bar only went about six inches off his shoulders before he received the bar once again in the front rack position. He took another breath and this time easily stuck the split jerk before standing the weight up with a smile on his face followed by a roar.

The crowd went crazy as Malheiros ran off the floor and jumped over a barricade before jumping into the arms of his family and loved ones in the stands.

However, it wouldn’t be CrossFit without some controversy, as some deemed the adjustment by Malheiros after his final front squat as a jerk attempt.

The race for the women’s individual Games invitation continues to be highly contested as no one has stepped up to lay claim with a dominant performance after two days of competition. However Brazil’s Andreia Pinheiro looks to be in position to claim at least one of the qualifying spots as she has been the most consistent albeit out of nowhere.

She was tied for the lead after Day 1 with Venezuelan Laura Gonzalez-Marin, after Day 2 she remained tied but this time with fellow countrywoman Victoria Campos. Pinheiro’s consistency paid off in the final event on Saturday as she recorded her first workout win, finishing “2014 Regional Workout 5” in 4:24, eight seconds ahead of Campos in their heat.

Both Pinheiro and Campos are seeking their first invitation to the Games which itself is a story as both are among the most experienced and popular athletes in the field. At 39 years old Pinheiro is the second oldest woman in the field, Campos is 29 years old.

Can both athletes hold on to the top two spots and make their Games dreams come true on Sunday?

Malheiros’ performance on Saturday (a win in the “Barbell Complex” and third in the “2014 Regional Workout 5”) further distanced himself from a field that is still looking for someone to step into the second and final Games invitation spot. Malheiros currently holds a 84-point lead over current second place athlete Pedro Martins.

Martins has been the most consistent athlete so far outside of Malheiros, the 32-year old Brazilian is the only athlete besides Malheiros that has all top-10 finishes. This year’s Semifinals is the highest level of competition he has participated in after placing 23rd in  Quarterfinals and 3,963rd in the Open (114th in Brazil).

Twenty-four points behind Martins is Bruno Marins, a 25-year old Brazilian who like Martins was not highly ranked heading into the Semifinals but due to two top-10 finishes including a second place showing in the Run-Swim-Run finds himself in contention.

Meanwhile, an athlete many thought was the second-best South American, Agustin Richelme finds himself in fifth place, 45 points behind Martins. That margin isn’t impossible to make up mathematically, however it is unlikely especially considering the level of consistency Martin has shown so far.