Four Heartwarming Stories at the 2022 CrossFit Games, So Far 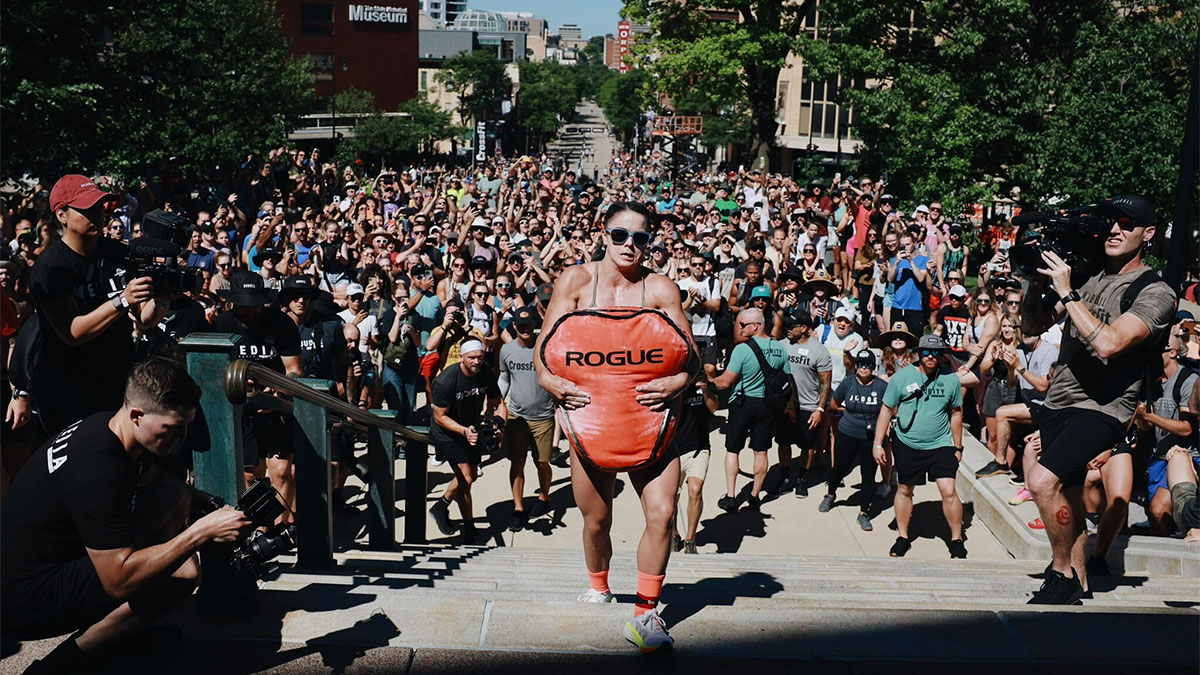 Let’s face it, life can look rough from the surface and this planet seems like it’s kind of a mess right now: wars, a lingering virus that ravaged us for two years, political instability. But underneath it all is the good of humanity, and the fact that we can still do the things we love.

The CrossFit Games is known for having an infectiously positive atmosphere as like-minded people who want to be fit and healthy, mentally and physically, come together to celebrate fitness and watch some elites crush events we could only dream of completing. With that in mind, here’s five stories right now that have reminded us that things aren’t so bad, we can always get better, and life can always be beautiful if you know where to look.

It was a grueling test Friday in Madison that included heavy pig flips, a 3.5-mile run, and odd object carries that ended with a heart-breaking climb up the 49 stairs of the Wisconsin State Capitol building while bear-hugging a heavy Husafell bag. Oh yeah, and you couldn’t be saved by the clock–no time cap.

Well after the leaders had finished heat two (and already finished their post-event interview with Niki Brazier), one athlete, 22-year-old rookie Rebecca Fuselier stood alone at the bottom of the stairs with her 150-pound Husafell sandbag at her feet. One of the smallest competitors in the field, standing at 5’2” and weighing in at 125 pounds, the bag was quite literally bigger than she was.

We’ve all been there, the last one working on that metcon as the rest of the class looks on. But that’s what’s so great about CrossFit, the person in last place always gets louder cheers than the person in first and that’s exactly what happened to Fuselier in a moment that will go down in Games history.

The crowd moved in close and encircled her as she gritted it out, moving the bag a few feet and a few steps at a time, cheering her on every inch of the way. When she crossed the finish line the crowd went wild and a few minutes later as she sat on the Yeti cooler drinking, Noah Ohlsen, who is known as an athlete’s athlete, always pumping up his competitors, moved in close to tell her that she would have the coolest photo of the weekend with the entire city behind her.

Four years and change ago Australian Ricky Garard was the most hated man in CrossFit. He’d finished third at the 2017 CrossFit Games, then popped hot, and took a podium spot from Patrick Vellner, who is probably the most liked guy in CrossFit (it’s a tight race between him and Ohlsen).

Gerard fumbled, denied, then copped to using PEDs. He then served his time like a man, stayed in shape, and returned triumphantly this year. The community has embraced him, because we’re all for second chances and we’ve all messed up at one point in our lives–and he has handled it all with class and poise after a few verbal slip-ups and shown us he’s really just all about AC/CD, meat lovers pizza and having a good time mate.

If Gerard wins this year, which is looking like a serious possibility, he will become the redemption story of all stories. CrossFit had a number of athletes test positive this season, shaking the sport’s resiliency, but Gerard has shown us all we can make mistakes, learn our lessons, and come back even stronger.

His story is ripe for a Hollywood screenplay. Russia’s Roman Khrennikov was long seen as the greatest CrossFit athlete to never have competed in person at the Games. Visa issues kept him out of the country and it wasn’t looking good at one point.

Enter Wisconsin couple Roza and Pat Giles, who decided to be super amazing human beings and vouch for Khrennikov and ultimately get him a five-year athlete visa to come to the US and compete. How amazing, given the two had never even met Khrennikov in person before he landed in the US earlier this year.

Oh wait, there’s more. Khrennikov got his visa, then had to make a split second decision to leave his pregnant wife given the fact Russia’s invasion of Ukraine was basically shutting down all international borders to Russians. He made his way to the US, and then a few days ago, finally met his wife and newborn son in the airport. Cue the tears.

Last year was rough on a couple athletes when it came to COVID. Most notably Kari Pearce and Bethany Shadburne, who had their dreams of competing stolen from them, and Kara Saunders who was just recovering from the infection and had to withdraw. Danielle Brandon was then forced to compete in isolation as it felt like the world was moving on from the pandemic in two steps forward, one step backwards.

This year there is barely a mask in sight, and oh man does it feel nice to get back to normal. Large scale sporting events were one of the biggest things taken from us during the pandemic, and it made us all so much more appreciative of simply being able to get together in groups and cheer on our favorite athletes and or teams as they do what they love at the top of their game.