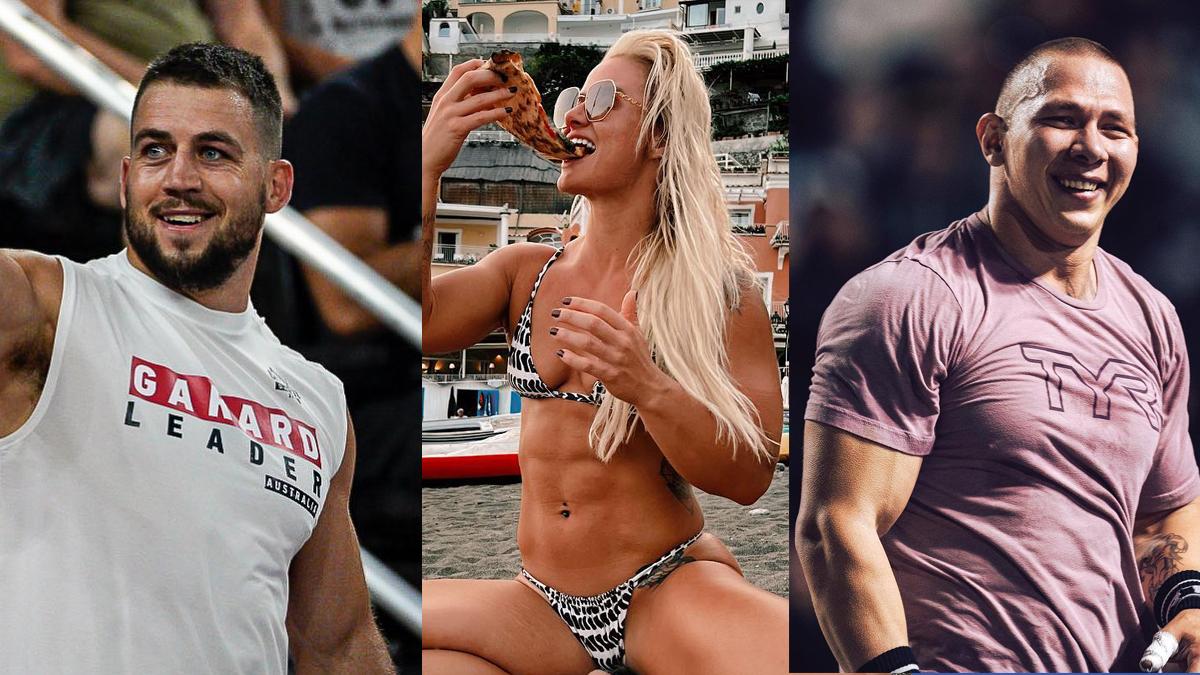 It’s that time of year, bust out the turkey and the gravy, and get ready to eat yourself into a food coma besides family members you love, cherish and hate to love. Thanksgiving is also a good time for us to give thanks, of what we are truly thankful for, like that first sip of water after a hard workout, or a well earned cheat meal.

Right now, Roman Khrennikov is having his first American Thanksgiving with his wife and newborn son, and everything about this is amazing. Khrennikov, as CrossFit fans know, has gone through an arduous journey just to get to the US, and then promptly made his way onto the podium of the 2022 NOBULL CrossFit Games.

We’re thankful Khrennikov was able to secure a visa, with the help of some amazing people, and is now seen as a podium threat for every competition he sets foot on, on American soil.

One of the most loved CrossFit competitors had a rough 2022 NOBULL CrossFit Games season. Smith, whose semifinal appearance at the Granite Games is chronicled in a Buttery Bros documentary, did not go as planned for him. But Smith showed why he is so likable, as he roared back onto the stage at the 2022 Rogue Invitational.

We’re thankful for athletes like Smith showing us that bad competitors, or bad seasons, can be overcome, and we always have the opportunity to live to fight another day.

After a tough end to her season, the teenager went back to the gym and trained for the off-season, knowing that she might get a jump on others. It panned out when she won at CanWest. After that she took on the Madrid Championship, placing seventh and then the Rogue Invitational where she took 19th after a tough weekend.

We look for her to take on the 2023 season with a vengeance and thankful that she is back in the mix and ready to rock.

The 16-year-old had a chance to take on the individual field in the 2022 season, but chose to compete as a teen one more time (oh yeah, she won). But the teen, who routinely beats her partner Jacob Heppner in training workouts, took on the individual division at the Rogue Invitational.

Even though she finished the weekend in 16th out of 20, she took second in the final event, “Heavy Grace” and we’re thankful to add this youngster to our reporting repertoire for years to come.

Laura Horvath faced some adversity after making a big splash and taking second at the 2018 Games in her rookie year. After a couple of tough seasons, the Hungarian powerhouse roared back with a second at the Games in 2021 and a third in 2022.

At the Rogue Invitational, despite a tough handstand push-up event, the three-time Games podium athlete stayed poised and took home the gold. We’re thankful she’s been able to come back from an early career hiccup and dominate like we always knew she could.

The 2023 NOBULL CrossFit Games Rulebook is here and it’s safe to say there are some interesting updates this time around. It looks like CrossFit is learning from the past and making proper adjustments related to things that happened last season. This is good news as the sport moves forward and tries to further professionalize itself.

We’re thankful for CrossFit learning from its past and its mistakes to better the sport and take it into a bright new future.

Mat Fraser won five CrossFit Games championships mostly doing what Mat Fraser does best: dominating events and looking like he was on a whole different level when it comes to the sport of CrossFit. Justin Medeiros, who has now taken over the crown from Fraser, having won two back to back championships now, is not Fraser, and that’s awesome. Medeiros is mister consistency, and he rolls to wins by accumulating points on a consistent basis and then hitting overdrive when needed.

We’re thankful for Medeiros being Medeiros, and showing that there are many ways to win.

Brent Fikowski, Jeffrey Adler and Patrick Vellner will be competing together as a team at this season’s TYR Wodapalooza, and this is a perfect time to celebrate the three Canadian men from the Great White North. All have distinct personalities but have that cold maple syrup blood running through their veins, and the sport is much better having them in it.

We’re thankful for these guys, their will to compete, their ability to overcome obstacles and we forgive them if they celebrate Thanksgiving at a different time of year than us.

Ricky Garard Proving Second Chances are Worth It

The fun loving Australian did his time, returned and won the hearts and minds of CrossFit fans, proving second chances, however rare, are still worth cheering for. Garard has shown that people can learn from their mistakes, become better in the process, and also make their way onto podiums after extended breaks from competing.

We’re thankful for Garard and for CrossFit showing that rules are in place for a reason, but that doesn’t mean people can’t redeem themselves if they screw up once in a while.

Dani Speegle and her “Girls Who Eat” Shirt

Speegle ended the CrossFit season with a bang, and a memorable event for the ages: the sandbag ladder clean at the 2022 NOBULL CrossFit Games. Speegle, who always crushes a heavy event, then followed that up with none other than some Crumbl Cookies. Speegle then had another brilliant event as an encore, crushing the log lift at the 2022 Rogue Invitational, while wearing a now iconic shirt that says “Girls Who Eat”.

We’re thankful for Speegle, one of many female CrossFit athletes who are redefining traditional norms when it comes to women, strength, beauty and what it means to kick ass all around, all the time.