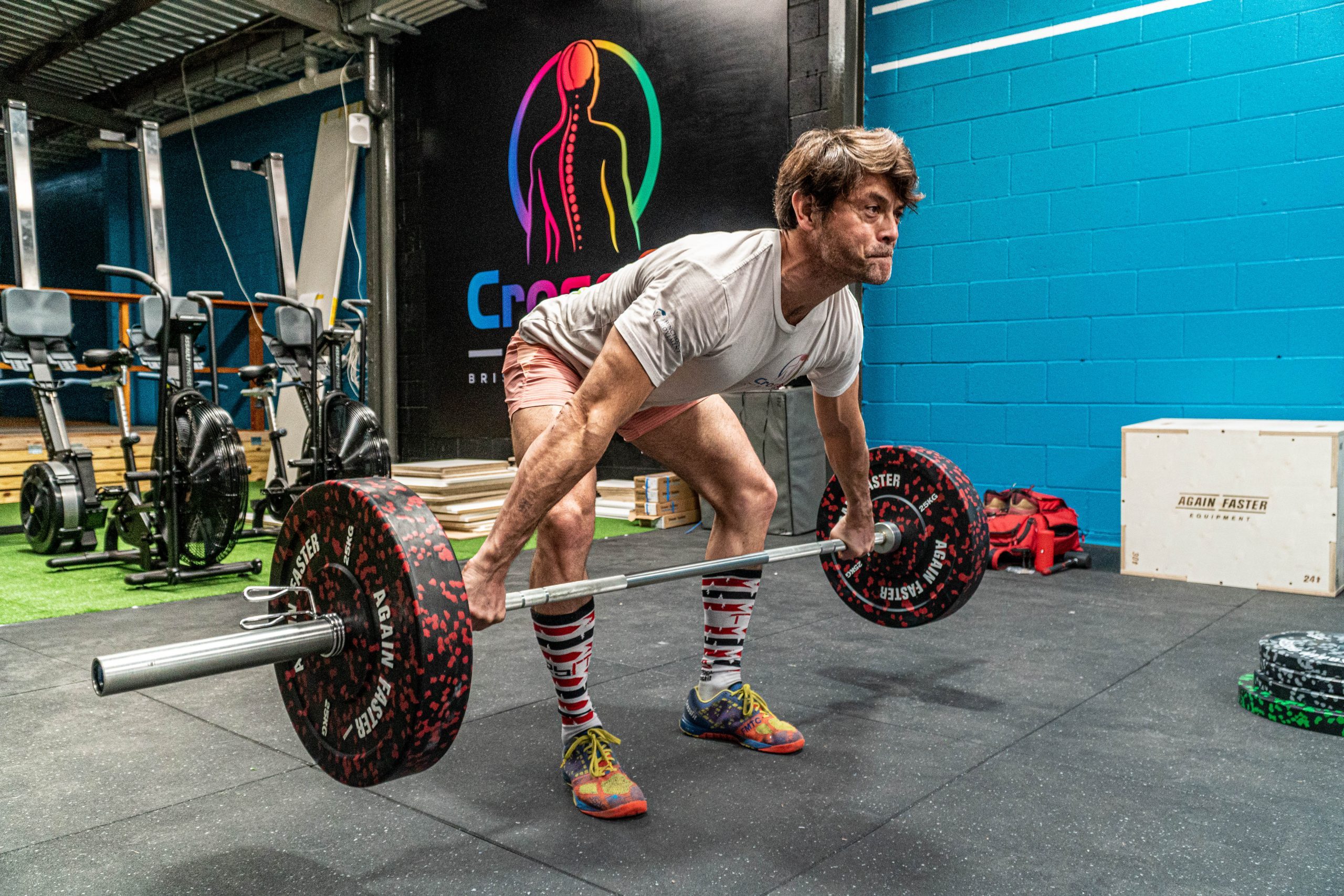 Dr. David Johnson at his Australian affiliate CrossFit Neuro Source: Luke Duffy
Enjoying Morning Chalk Up? Help to ensure that we can continue to be an independent voice for the community and sport we love by supporting our journalism today.
Support Our Journalism

There’s nothing like the raw, grassroots community of a CrossFit box and you’d be challenged to find an affiliate across the globe that wouldn’t hustle and support a member who’s down and out.

The 52-year-old was diagnosed with glioblastoma – a terminal brain tumor – in June 2018. What started as a migraine he simply couldn’t shift: “I was given three months to live if I did nothing,” he said.

Sholto has since undergone two surgeries to remove the growing tumor, fighting to prolong his life expectancy of two years.

The Australian brain and spinal neurosurgeon first found CrossFit in 2015. He’s since pioneered the first in hospital CrossFit box in the Southern Hemisphere with his wife Joanne, a registered nurse. This year, they opened a second location, CrossFit Neuro in Brisbane, Australia.

Related: “Introducing the Drop-In Doc, a Full-Service Medical Clinic Located Inside an Affiliate”

“What CrossFit has enabled me to do is to create a clinical rehabilitation program that is founded upon movement proficiency,” Dr. David Johnson said.

“The best CrossFitters are the ones that can move their body and move the load most efficiently” and it’s this theory that Dr. Johnson uses to educate his patients.

CrossFit Neuro’s coaching staff is a mixture of Games and regionals athletes, exercise physiologists, physiotherapists, nurses and functional movement therapists. But what makes the box really unique – many members originated as Dr. Johnson’s patients, some suffering decades of chronic back and neck pain. They share a special bond in their transition from patient to athlete, now squatting, deadlifting, cleaning and snatching – you name it!

“It used to surprise me at how quickly patients transformed but then it just kept happening over and over, we’d probably be getting close to a thousand patients now. It’s no longer surprising but it’s still profound,” Dr. Johnson added.

The inaugural Brain Vs. Brawn competition

Most of the athletes at CrossFit Neuro have never met Sholto McKeown but in true CrossFit style, they’ll compete at the box’s first-ever competition – Brain Vs. Brawn on September 14 – to raise funds for Sholto’s ongoing and escalating medical costs.

“I’d never heard about Brain Vs. Brawn, NeuroFit or CrossFit before,” Sholto told the Morning Chalk Up.

“But I’ve always tried to maintain my fitness you know even though doing chemo and radiation, which just sucks the life out of you.”

“It used to surprise me at how quickly patients transformed but then it just kept happening over and over, we’d probably be getting close to a thousand patients now. It’s no longer surprising but it’s still profound.”

Dr. Johnson said they chose Sholto as the beneficiary for the box’s inaugural competition after everything he’s been through and his determination to defy the odds.

“He really epitomizes everything that we strive to create in our community, which is just being a good person, helping out a mate, being inspirational, being consistent,” Dr. Johnson said.

The Brain Vs. Brawn event will be made up of three divisions – Beginners, Intermediate and RX – inviting athletes of all levels in Brisbane, Australia to compete. Every cent raised will be donated to Sholto McKeown and his family.

“If there’s a fundraiser that brings awareness and brings people together about this hideous disease, that’s a good thing,” Sholto said.

David Johnson also can’t wait for many of his patients to celebrate their transition and compete for the first time.

“From some of them who considered themselves disabled, who would never be able to get off their pain killers. It’ll be fantastic for them to be able to experience that sort of transition to competing as an athlete,” he said.

Introducing the Drop-In Doc, a Full-Service Medical Clinic Located Inside an Affiliate

Burpees For BushFires: The CrossFit Community Rallies Behind those Affected in Australia

The ‘Ones to Watch’ from Australia at the Crossfit Games 2019

Poised for an Open Payday?

How To Be a Good Open Judge: Don’t Coach, Uphold the Standards