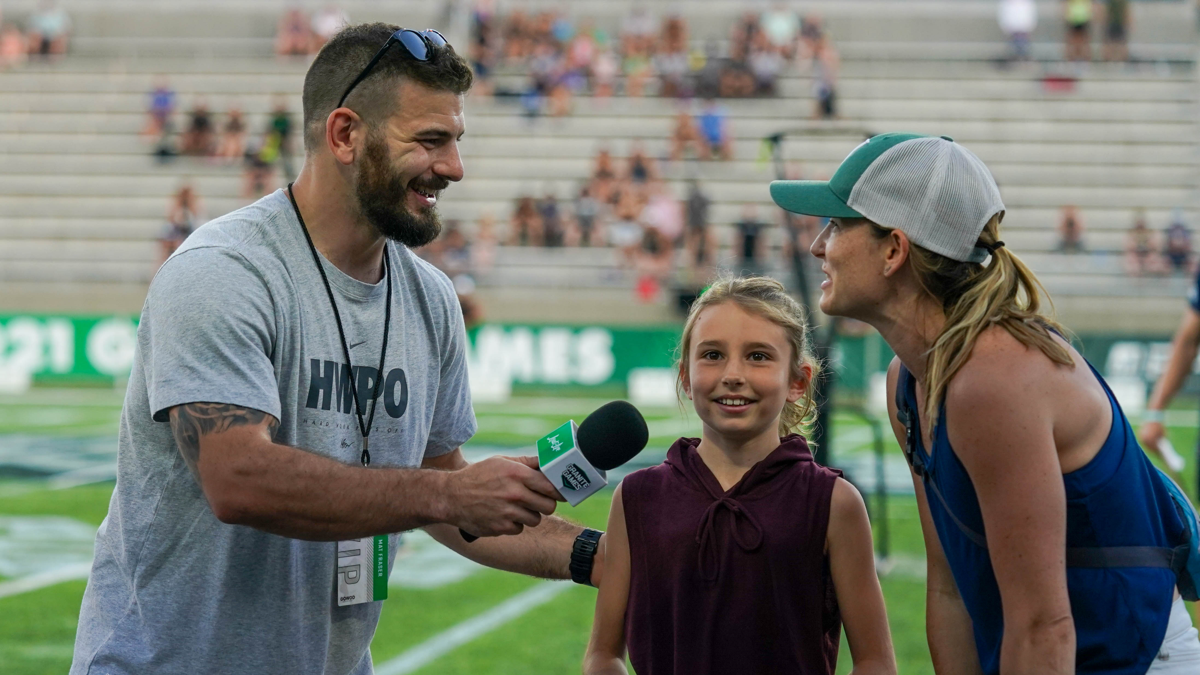 Week two of the NOBULL CrossFit Games Semifinals had its fill of compelling storylines whether it was the teens and potential Games newcomers making a push for their invites, record-breaking lifts, a man and his mullet making a run for the Games, or a mom winning an individual title to punch her ticket to Madison.

Here are five more takeaways from the Granite Games and the Fittest in Cape Town.

When Fraser announced his retirement back in February he stated, “I’ll always be involved in CrossFit. I just won’t be doing it from the competition floor any longer.” This weekend at the Granite Games he kept his word as he hosted free community workouts at TCO Stadium on both Saturday and Sunday morning, even going head-to-head against our very own Brian Friend in burpee-box-overs. But it wasn’t just the workouts, the five-time reigning and defending Fittest Man on Earth (yes he is still technically defending until we crown a 2021 champion) was engaging the crowd all weekend. Stopping to take pictures, sign autographs and talking with the fans who appreciate his accomplishments and his humility.

The highlight was Saturday when he had 20 fans come down to the field for a dead-hang challenge from the rig. He grabbed a microphone and looked comfortable behind it as he smiled and played to the crowd. When he noticed a 10-year old girl as one of the final ones holding on for dear life for a chance to win two Games tickets he immediately rooted her on. When she out-lasted the competition, young Bennett was helped by Fraser from the pull-up bar to her disbelief. She was soon joined by her mother who said the reason why she entered the contest was the chance to meet the champ.

Through it all Fraser smiled, he was having a blast and looked comfortable being himself amongst the crowd. It’s truly the happiest we have seen him. Having him involved in the sport and interacting with the community is what CrossFit needs as it attempts to recover from a tough year. Though he meant we won’t see him on the competition floor as an athlete anymore it sure was great to see him there. If this is what we should expect from him in the future then retirement looks great on him.

Back on May 10, 2020 two-time Games athlete Jason Smith essentially called it quits as a Games competitor in an Instagram post. The COVID-19 pandemic essentially ruined his plans to qualify for the Games. What makes his story so interesting is that this athlete was no ordinary Games veteran. He is perhaps arguably the greatest CrossFit athlete that the continent of Africa has ever produced.

The highlight of his career was his 10th place finish at the 2017 Games but now at 37-years old and the uncertainty of the CrossFit season, he was questioning if he would ever step foot on the Games floor again.

What he accomplished this weekend at the FiCT said two things. One, that Smith can still compete at a high level and will make his return to the Games and two, that the future of the sport of CrossFit in Africa is still lagging behind other continents. There appears to be no heir to Smith’s throne right now.

Fellow South African Ruan Duvenage was his closest competitor, finishing 36 points behind Smith but it was never as close as the final standings would indicate. Duvenage is 32-years old himself, third place finisher AJ Visser is 35-years old.

One would have to go down the leaderboard to sixth place finisher Ruan Potgieter to find a African athlete younger than 25-years old. Potgieter finished 173 points behind Smith showing the huge discrepancy between the athletes in the field and to Smith.

For Africa to earn more automatic invites to the Games outside of the ones they grant the division champions will take some time and someone to unseat Smith.

I’ve been able to attend two of the live Semifinals, Mid-Atlantic CrossFit Challenge last week and Granite Games this past weekend. Both were professionally run, on par with how CrossFit used to run Regionals. Each of those events offered a great in-person experience for fans of the sport. Amazing tests with the top athletes participating in them.

With those factors in play one thing I noticed was the low attendance at these events. There are many reasons why this may be, including the holiday weekend for the MACC or the weather for Granite Games. In any case, the fans and the communities in the area need to come out to these events to preserve the ecosystem.

After a year where many fans were longing for the return of live competitions, the organizers of the Semifinals have kept their promise to provide an exciting experience. What they need are butts in seats though to continue this in the near future. Bigger attendance equates to more sponsors and vendors being in attendance to cater to those fans, as well as more incentives for athletes and potentially bigger payouts.

4. Weather plays a factor at the Granite Games

If you know the history of the Granite Games you know that they pride themselves on having a majority of their events outside. Whether it be the football field of St. Cloud State or running up a nearby ski slope, the elements are definitely in play. None of that changed with the change in venue this year. Loud & Live Sports hit a homerun by establishing the Vikings Practice Facility in Eagan, MN as the new home of the top competition in the Midwest.

The Granite Games organizers are no strangers to holding outdoor events as they are the same people who operate Wodapalooza, what they couldn’t plan for though, was the unusually high temperatures for June in Minnesota. With all the events being held outside, there was no way to avoid the heat and the sun beating down on the field turf of TCO Stadium. With field temperatures reaching as high as 154 degrees fahrenheit during the weekend even later start times on Saturday didn’t help the athletes, especially in the team divisions who competed before the individuals.

Aquafina water became an unofficial sponsor of the competition as athletes were racing to the finish line, not just to win but to find respite in the bottled water sitting in the white Yeti coolers.

Any criticism of the programming for the event due to the lack of longer time domain workouts was dismissed due to the heat. Holding such an event would have been disastrous for the athletes and the fans in attendance. The organizers did the best with what they had and at the end of the day the athletes who competed at the Granite Games will be better prepared for Games where traditionally half the events are held outside under the sun.

5. Familiar Names Heading to the Games in the Men’s Division at the Granite Games

Everyone likes a good underdog story. That’s what made Jayson Hopper’s win at the MACC and Zach Watts Games berth so compelling. Neither were a part of the discussion for possible Games qualifiers let alone winning the Semifinal. Yet here they were defeating well-known Games veterans in workouts and surplanting them at the Games. The Granite Games had a similar roster of Games veterans and well-known names in the sport.

As the women’s division saw a changing of the guard of sorts, with four athletes including two teenagers moving onto Madison, the men’s division was less chaotic. After day one relatively unknown names like Anthony Davis, Nick Mathew, Jack Rozema, Taylor Self and Colten Mertens were making fans think that a Hopperesque scenario could be possible in Minnesota.

By the end of day two, most of those names found themselves outside the top-five and fighting to stay in the final heat as the veterans started to make their moves. The competition ended with the “New Guard” essentially shutout, left to compete for their Games spot in the Last Chance Qualifier while the podium featured five athletes with a combined 13 Games appearances including Colten Mertens who competed at the 2018 Games on a team.