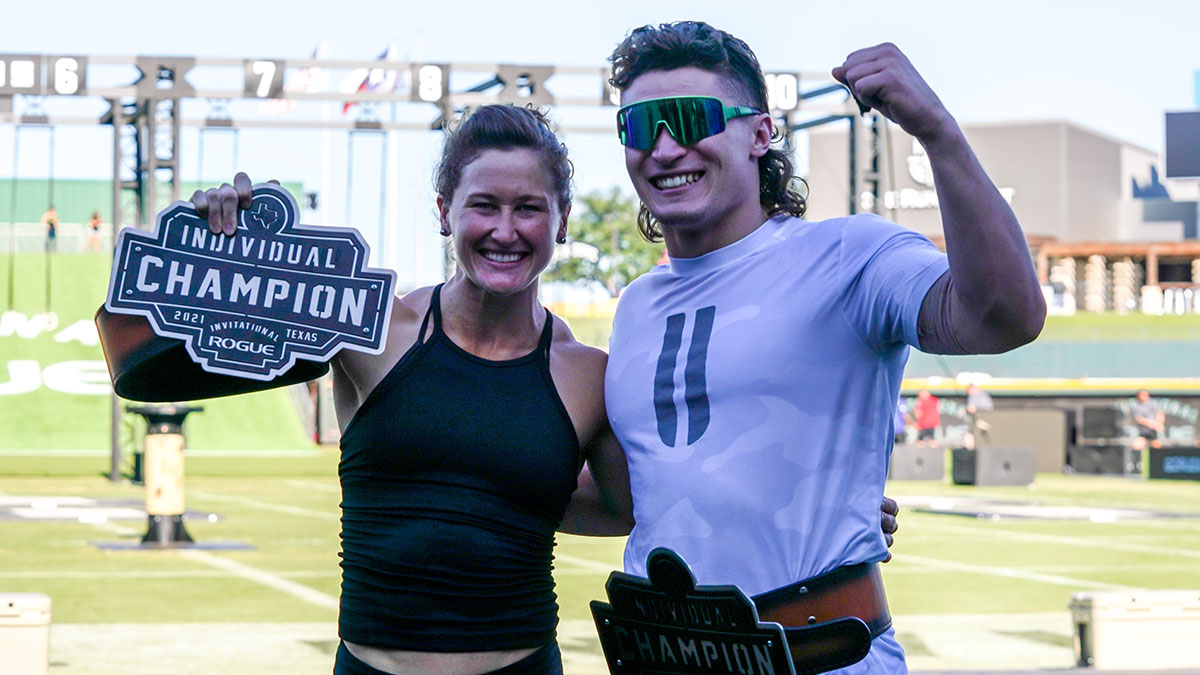 The star-studded field of athletes put up a fight but at the end of the day it was the “Fittest” that stood atop the podium at the conclusion of the final day of competition at the Rogue Invitational. Five-time CrossFit Games champion Tia-Clair Toomey won for the third time while Justin Medeiros won his first Rogue Invitational title to pair with his 2021 Games title.

Toomey made it 12-straight live competition titles, but for the first time since the 2020 Wodapalooza Fitness Festival, a span of three live competitions including two CrossFit Games, had to come from behind to win. Trailing Annie Thorisdottir by 15 points heading into the final day of competition, she erased that deficit in the first event of the day, placing second in the “Chipper” with a time of 15:17.43 while Thorisdottir placed sixth.

In the final event, “The Duel”, Toomey got stronger in every round of the elimination bracket. Meanwhile Thorisdottir had difficulty in handling the 165 LB sand bag which cost her valuable seconds and led her to be eliminated after the second round, sealing the Toomey win.

Toomey, with the championship secure, didn’t let off the gas and faced off against two-time Games runner-up Laura Horvath in the finals where she picked up her second event win of the competition. As she crossed the finish line she let out her patented scream and flexed, the first time all weekend the crowd saw the side of her that we all know.

When we announced that the “The Medeiros Era Begins” after his win at the Games there was some criticism of that statement for a one-time champion who had to hold-off podium favorite Pat Vellner. After the 22-year old’s performance inside Dell Diamond this weekend, that statement was proven as far from bold. Medeiros looked even more impressive than he did three months ago. He turned a 35-point lead heading into Sunday into an 80-point victory over Vellner.

Just like at the Games, Medeiros was consistent throughout all seven events, with an average placing of 2.5. He just won one event but placed in the top-3 in all but one event including three runner-up finishes. His worst finish on the weekend was a fifth place in Sunday’s opening event but even then he finished just one spot behind his nearest competitor, Vellner. We can now confidently proclaim that the “Medeiros Era” is in full-swing and that all challengers be aware that he has no intention of slowing down any time soon.