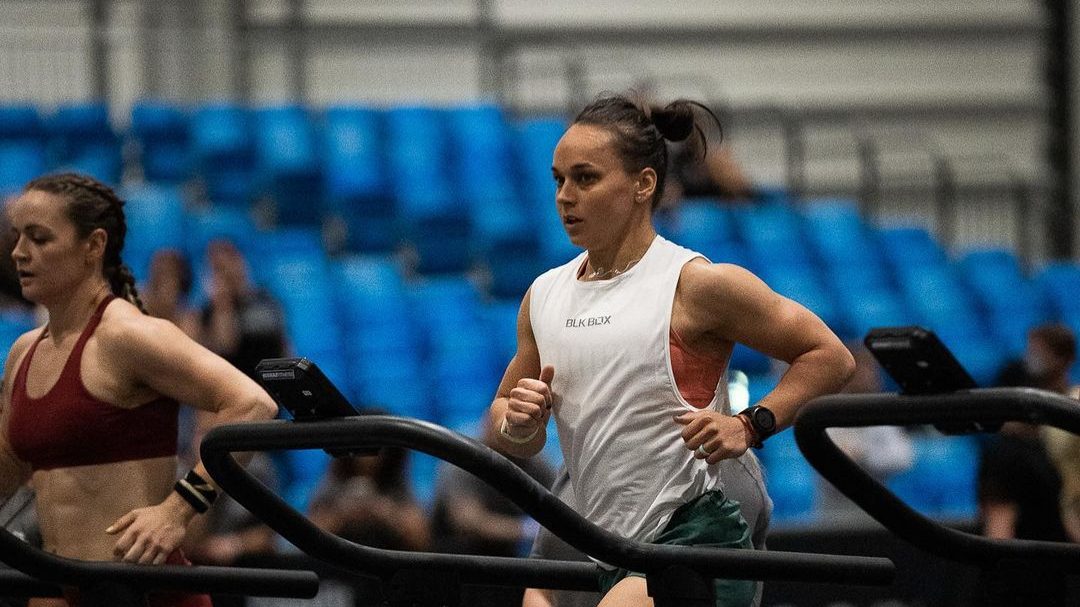 The 2022 Strength in Depth CrossFit Semifinal has put a cap on day one, and it’s Emma McQuaid, Willy Georges, and CrossFit Oslo Navy Blue in the drivers’ seats.

While McQuaid holds the lead, it actually comes via a tiebreak over two other women. And while that means she’s had the best event finish of the three, it also means she’s had the worst. Games veterans McQuaid, Jacqueline Dahlstrohm, and Thuri Helgadottir are all tied with 176 points. McQuaid went seventh and first, Dahlstrom sixth and second, and Helgadottir showed the most consistency with a fifth and a third.

One of the biggest stories this weekend is the UK’s Sam Briggs who is attempting to qualify for the Games in the elite division at forty years old. If she’s able to do so it will be the first time anyone has done that in over a decade. Well, she’s off to a great start with event finishes of third and ninth so far. She’s in fourth overall and will be in the last heat tomorrow, as opposed to the first today.

The final Games spot is being held down by one of the popular picks to qualify for the Games as a rookie this season in Europe. Solveig Sigurdardottir has been progressing steadily over the last two seasons. She’s put herself in an excellent position through two events. She took second and 11th on day one; she’s eight points clear of Nicole Heer in sixth.

Katrin Davidsdottir, who has made the last seven consecutive CrossFit Games and is seeking her tenth overall trip to the Games currently finds herself in a tie for 9th. She looked great on the long endurance event, and held a lead in her heat through one round of event two. That lead did not last long however as her old nemesis the ring muscle-up slowed her all the way down to last in her heat and an 18th place finish overall.

Willy Georgres appears to be back. It’s well-documented about the surgery that kept him out of last season. A year later and through one day he’s looked great, taking fourth on the long aerobic piece, and then demonstrating tremendous capacity in the shoulder on the ring muscle ups and hang snatches en route to a second place finish on event two. After one day he’s got a twenty point lead on the field.

There are three men from Finland in the top seven, but only two in the top five. Sitting on the outside looking in is last year’s sixth fittest man on earth, Jonne Koski. While countrymen Henrik Haapalainen (3rd) and Ludvig Hahnsson (5th) are both in qualifying positions. Haapalainen of course was also at the Games last year, he took 18th; he won event one in convincing fashion to begin his weekend.

Hahnsson is much less well known. His background is in handball and long distance running. Not surprisingly, he looked extremely composed throughout the twenty minute Copperfield workout. What was surprising was his capacity for ring muscle ups, and even more so the hang snatches which he was cycling faster than most of the other men out there.

The final two Games spots belong to Elliot Simmonds (2nd) and Giorgos Karavis (4th- on a tiebreaker behind Haapalainen). Karavis started slow with an 11th, but came back with an event win on Havisham. Simmonds was the opposite, he came out with second on the first event, and regressed to a ninth place finish on the second.

Several Games challengers are lurking outside of qualifying currently. But perhaps most surprisingly is last year’s 15th fittest man, Andre Houdet, who placed 19th and 8th on events one and two respectively, and finds himself 54 points out of qualifying in 14th overall. There have been athletes this Semifinal season who have rebounded from worse, but Houdet will need to be much cleaner throughout from here on in if he wants to go back to the Games.

The headlines will be all about CrossFit Oslo Navy Blue, as they should be. While everyone has been making this season’s team competition about the battle between Mayhem and Reykjavik, that hardly seems fair to last year’s runner up from the Games. They’ve added former Norwegian national champion, Nicolay Billaudel, to their roster this season, possibly even improving their roster from last year. They won the Europe Team Quarterfinals with only 14 points and no finishes worse than fourth in the continent, and they won the first two events in London by almost a minute each. It’s still early in the weekend, but they could not be off to a more impressive start.

Joining Oslo in the top five are two other teams from Norway:

At the end of day one the other two teams in qualifying spots are CrossFit Aylesbury Team TAP who placed second on event two and CrossFit Mayflower. Both of whom came in as top five seeded teams and strong picks to make the Games.