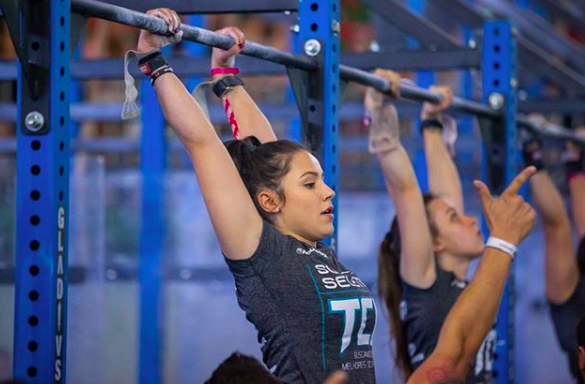 When the CrossFit Games announced on April 30 that teenagers and masters would not be included in the 2020 CrossFit Games, keyboard warriors were quick to diminish the surprise, disappointments, and frustration that these athletes were feeling.

“The individual division is open to anyone” and “CrossFit doesn’t owe you anything” were recurring themes in the comments on the Games social media post announcing the change, the same post that informed the athletes themselves that they would not get their own Games this summer.

“There’s always next year” is the natural response of many, but for one group of 15 teens this was likely the last, and maybe only, chance they would have at getting their name on a Games jersey.

The 17-year-old athletes will age out of the teen division for the 2021 season. Dave Castro and the Games have made it clear that the season will completely reset after the still up-in-the-air 2020 Games, and no age group athletes that qualified this year will get a free pass to the ‘21 Games.

While yes, these 17-year-olds will have the opportunity to compete as individuals, only 8 former teen athletes have ever made an appearance at the Games in the individual or team divisions. Furthermore, Haley Adams is the only teen to ever qualify for the individual division the year she aged out of the teen division.

So for these fifteen 17-year-olds, this decision eliminated an extraordinary opportunity in an instant. But when the coronavirus outbreak struck, the reality seemed to set in long before the Games announced the cancelation of their season.

Martinez said his immediate reaction to the Games’ announcement was to be “shocked and livid,” but he has since come to terms with the decision. The 17-year-old out of CrossFit VTG in Tennessee narrowly missed qualification for the Games in 2019 after two consecutive runs at the podium in the 14-15 divison, coming in fifth in 2018. Martinez finished the Qualifier in sixth place worldwide, but was moved up to fourth after the video review process. Now aging up to the daunting individual division, Martinez is unsure of his future in the sport.

Martinez’s competitor and 2018 teen Games champion Tudor Magda was emerging on the scene as a clear favorite to win the boy’s competition this year. Magda was aiming high for that top podium spot, but does not seem a bit fazed about moving up to compete with the big names.

Just like Martinez, Magda said the thing he’ll miss most about the teen division is the community among athletes.

Gaining Experience in the Individual Division

Another teenager that’s made a splash among the CrossFit fanbase, Paige Powers, was setting herself up with an impressive resume leading up to the AGOQ. Powers competed in the Elite Women’s division at Strength in Depth and the Mayhem Classic, placing 14th and 18th respectively. Undoubtedly having gained valuable experience competing with adults, Powers was fired up and ready to cause a stir in the Individual division. . . she just didn’t think it would come so fast.

Perhaps the most affected by the elimination of the Games are athletes like Anikha Greer, who would have been making her first trip to Madison this summer. Greer has been a long time bubble athlete, missing qualification by just one point in 2018 and being on the wrong side of the infamous 20-to-10 cuts to age group qualifiers in 2019; she finally broke through this year, placing second in the world, behind last year’s 14-15 champ Emma Cary. Greer was the most consistent athlete out of the ten qualifying athletes, the only one to have no events outside of the top ten.

Just when Greer thought the hard work had finally paid off, the Games were pulled out from underneath her. After completely changing her training regimen leading up to the AGOQ in order to secure a place in Madison (she says she cut out heavy lifting, replacing it with rowing and burpees all day every day), Greer was proud and ready to show off her work and how her downfalls in the past had made her stronger.

Focus on What You Can Control

Even if their last chance at the Games as a teen was taken away from them, these teens understand that the circumstances are beyond their control. Martinez, Magda, Powers, and Greer all recognize that under the current global situation, a normal Games experience wouldn’t have been feasible.

Still, there are some things CrossFit could’ve done better, some ways to gain more understanding.

What else could the Games have done, in addition to a courtesy email, to handle the situation better, let the teens down easier? The teens suggested a multitude of other things: an online competition to find the definitive fittest within the Top Ten. Conversely, HQ could review all six videos from the AGOQ to definitively decide who deserves to win that title of the Fittest. What about a headband or t-shirt with their name and jersey number? A $500 scholarship for each athlete? All of these things seem doable for the Games, but none will replace the opportunity the teens who are aging out no longer have.